Invisible is better: when sustainable solutions blend into the landscape

21 Dec 2022 — Solar panels disguised as ancient Roman tiles or terracotta bricks to match the city skyline. The innovative solutions adopted by the archaeological park of Pompeii and the Portuguese city of Évora pave the way for an inspiring model: turning architectural constraints into assets, boosting heritage and sustainability.

Each year over 3.5 million tourists from all over the world visit Pompeii to admire the ruins left by the eruption of the Vesuvius that, in 79 AD, engulfed it together with the nearby city of Herculaneum. Some of them might have bumped into the sheep which have been recently introduced to mow the grass in the archaeological park. But certainly none of them will have seen the solar panels on the magnificent House of Cerere. “They look exactly like the terracotta tiles used by the Romans, but they produce the electricity that we need to light the frescoes,” says Gabriel Zuchtriegel, Director of the Archaeological Park of Pompeii. This solution is part of a more comprehensive strategy to turn costs into savings opportunities and to embrace sustainable development. “Pompeii is an ancient city which in some spots is fully preserved. Since we needed an extensive lightning system, we could either keep consuming energy, leaving poles and cables around and disfiguring the landscape, or choose to respect it and save millions of euros.” 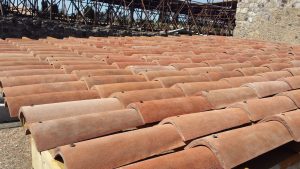 Technically called “traditional PV tiles”, the invisible solar panels used in Pompeii come from Camisano Vicentino, a little Italian town with slightly more than 10 000 inhabitants, halfway between Padua and Vicenza. They were created and patented by the family business Dyaqua. “It is me, my father, my mother, and my brother,” says Elisabetta Quagliato. “Since photovoltaic production is increasing, we are expanding and now have two employees.” The idea came from her father Giovanni Battista, who made a business out of his hobby of plastics and electricity. “He wanted to solve the problem of spotlights in public areas, which spoil the view once they are switched off”. The traditional PV tiles are made from a polymer compound, which allows the sun’s rays to filter through. The photovoltaic cells are then integrated into it by hand and covered with a layer of the polymer compound. “We can also give it the look of stone, wood, concrete, and brick. As a result, such a solution can be installed not only on roofs but also on walls and floors.”

Dyaqua’s clients are mainly local councils, owning assets that are subject to artistic or architectural constraints. Approved by the Italian Ministry of Culture, the traditional PV tiles have been also installed in Vicoforte, not far from Cuneo, and will soon be used in Rome’s renowned museum of contemporary art, Maxxi. In the coming months, they will also cover the roofs of some public buildings in Split, Croatia, and Évora, Portugal. Together with Alkmaar, in the Netherlands, the Portuguese city is one of the demo sites that are testing innovative solutions aimed at combining sustainability with the valorization of architectural and cultural heritage, within the European project POCITYF. The Italian company Tegola Canadese is among its technical partners. “Évora is a beautiful city, on the top of a hill, facing south,” says its Research and Development Manager, Graziano Peterle, “Since it’s not flat, wherever you are, you can basically see every single roof of the city. Most of them are red or terracotta but since the photovoltaic panels are usually dark blue or black do not go unnoticed. This is why the municipality insisted on implementing an invisible solution.” 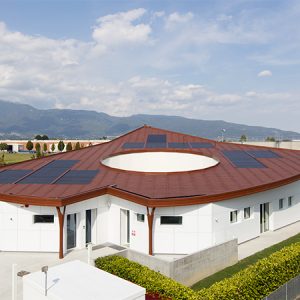 The only way to disguise the solar panels would have been to paint them, but this would have reduced their energy performance. This is why Dyaqua was called on by Tegola Canadese, which is managing other solutions in Évora. “While the traditional PV tiles will cover the roof of the City Hall, we are in charge of a sports hall, a scientific centre, and two parking lots,” says Peterle. The technology that will be used on these sites is called Tegosolar. “Unlike traditional photovoltaic panels, which are external elements, our solution consists of a proper roofing material,” he explains. A few years ago, the Italian government established subsidies for the installation of photovoltaic systems. However, the incentives were greater for solutions that were integrated into the roofs. Hence the idea of developing a walkable, completely flat solution. “Tegosolar has an aesthetic benefit because it doesn’t protrude from the roof and it is invisible from the road. It is also safer because it resists strong winds and is less sensitive to the direction of the sun.”

Solutions like Tegosolar and traditional PV tiles are crucial for matching sustainability with conservation, protection, and enhancement of heritage. “One key aspect is to look at the cultural sites, ancient buildings, and historic cities not as obstacles, but as assets for reducing our carbon emissions,” says Francesca Giliberto, an architect specialized in conservation and management and postdoctoral researcher at the University of Leeds. “The very challenge not to damage historic buildings for contemporary purposes is to use the most innovative solutions, respecting their value and cultural heritage.” The role of culture and heritage in sustainable development was officially recognized by the 2030 Agenda, adopted in 2015 by the United Nations. However, of its 169 goals, just one acknowledges the role of culture in development processes. “It is modest progress, and there is still a long way to go,” says Giliberto. “But in the past 5 years the potential of culture and heritage has been widely highlighted by UNESCO, and other international organizations. Now it’s up to policymakers and urban planners to start thinking differently: they must understand that as heritage professionals, they can make a huge contribution to sustainable development”.

The effectiveness of such an approach is proven by the successful experience of Pompeii. “The invisible photovoltaic not only helps us cut the energy bills but it also makes our archaeological park more enjoyable. This is therefore just the beginning. From now on, we will be taking this solution into account for all future renovation and restoration projects,” says Zuchtriegel. Traditional PV tiles were also installed in the Thermopolis and recently in the House of the Vettii. “We are an archaeological site but we also want to be a real-life lab for sustainability and valorization of intangible heritage. Our initiative is not merely symbolic. Through the million tourists who visit us every year, we want to send a message to the World: cultural heritage can be managed differently and in a more sustainable way.” Once proven successful, solutions such as the traditional PV tiles will also be tested by the POCITYF project in the so-called follower cities of Bari (Italy), Ioannina (Greece), Granada (Spain), Celje (Slovenia), Hvidovre (Denmark), and Újpest (Hungary).

> News > Events
News POCITYF in the book ‘Architectures for Next Generation EU Cities’
Newsletter POCITYF – Newsletter #5
News 2nd life batteries in disaster scenarios
News POCITYF leads the way to a better use and distribution of energy within smart cities
Stay tuned!
Join our newsletter
We just need a few informations: *mandatory fields
We use cookies to ensure that we give you the best experience on our website. If you continue to use this site we will assume that you are happy with it.OkNoPrivacy notice